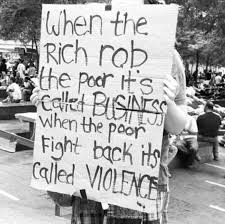 We are told repeatedly that we must all pay for the ongoing crisis that capitalism finds itself in… Pension cuts, job losses, longer hours, worse pay, more taxes, less services, more privatisation, bail outs and subsidies for the rich and increased hardship and destitution for the working class and the poor.

This is on a global scale. The debt crisis that capitalism created is being used to excuse an all out attack on those who did not create that ‘crisis’ in the first place.

Capitalism is based on robbery – it is built on profit and greed. The working class built the wealth of this society through our labour. The wealthy have siphoned off the true value of our labour to create immense wealth for themselves. This is what they call profit. They would prefer to leave us with just the bear minimum we need to survive.

This does not always work out just how they would like it to. Through organising and taking action against bosses and government working class and unemployed people forced concessions from them. Higher wages, the 8 hour day, paid holidays, health care, access to free education, pensions. Our combined struggles won all of these things and much more. Now it seems the bosses are having none of that and are stripping us of the little we have fought for over the years to line their pockets with even more of the wealth we create!

In the north youth unemployment has more than trebled since 2008. We are set to lose 26,000 public sector jobs by 2017. With the Welfare Reform Bill before Stormont this month the most vulnerable in our society are set to become even worse off. Poverty is on the increase while the gap between rich and poor has never been greater. The rich continue to get richer while we continue to get poorer. Mortality rates for those living in deprived areas have been found to be no better than during the depression of the 1930s!

The thing is this isn’t a crisis – well not for capitalism anyway. It is simply business as usual.

Instead of continuing to let these bastards rob us blind its time we robbed them! Or rather turned the tables and organised to take back what, is after all, rightfully ours.

Saturday 3rd March was a day of action against ‘Workfare’ across the UK. But why would anyone protest against those generous employers that are giving people who cant find work valuable experience that will help them land a job?

Basically because this is spin of the highest order, and what they have really done is reached an agreement with the government to use unemployed people as cheap labour.

First though its worth remembering that workfare was happening under Labour’s ‘New Deal’ (so all the leftists shrieking about ‘the evil tories’ are off the mark again). Tesco recently came in for huge public criticism after they advertised for a person to do full-time night shift for their JSA. There are actually five types of workfare, which the Solidarity Federation have been good enough to condense into a single factsheet: The Work Programme: Coalition‟s flagship workfare scheme which replaced Labour‟s Flexible New Deal in summer 2011. Claimants are referred to private companies who can organise mandatory unpaid work placements for as long as six months. Refusal means loss of benefits. Mandatory Work Activity: The Job Centre can order claimants to work up to 30 hrs a week for a period of four weeks without pay. Refusal to comply means loss of benefits. Community Action Programme: Currently being trialed in some regions and due to be rolled out nationally in 2013. Similar to the Work Programme but claims to focus more on community service work; these roles will replace many of the low-level public sector jobs that are currently being cut by councils.

Refusal means loss of benefits. Work Experience: This scheme, alongside Sector Based Work Academies (below) are what the government want you to think the term „workfare‟ means, because they are the least offensive of the workfare schemes. They tend to describe it as voluntary work experience for 18-24 year olds organised through the jobcentre. The degree to which the scheme is genuinely voluntary is disputed as there are countless reports of lies and intimidation to get jobseekers to participate and after one week the scheme becomes mandatory. Although recently, to save face, the government has emphasised the voluntary aspect and stated that sanctions would no longer be used against people who refuse to participate. Sector based work academies: Similar to work experience but this scheme incorporates a training element alongside unpaid work placements; available through the jobcentre in conjunction with businesses and training providers. Like work experience the scheme is nominally voluntary, however once a claimant accepts a place the scheme becomes mandatory and withdrawal may result in loss of benefits. In addition to workfare proper, there are also other ways in which the minimum wage is being undercut. A major one of these is the spread of supposed ‘apprenticeships’.

Increasingly, entry-level admin jobs are being advertised as apprenticeships, which means they can pay £100 per week (higher than £67/week jobseekers allowance for workfare, but lower than minimum wage). Previously these were normal, paid jobs, but now firms can get cheap labour by rebranding entry-level jobs as apprenticeships and giving a low-level NVQ in admin (which doesn’t help find work, as higher-level admin jobs require experience not NVQs). So, far from being a way to help the unemployed, workfare is another way to punish the jobless for being jobless. A way for businesses to get work done without having to pay even the minimum wage, for the decimation of the public sector to be covered up by getting the unemployed to do the same work for no wages, and certainly not for one of those over-generous gold plated public sector pensions. It even goes as far as to redefine what the word ‘benefits’ actually means; benefits are what you get when you don‟t, or can‟t, work for wages. If you have to work for them then they become, in real terms, just really, really shit wages. As far as alleviating unemployment, why would any employer create posts paying even the bare minimum, if they can bring in someone who’s been forced into it for their JSA instead? Those of us in work are not immune from the logic of workfare; it undercuts the minimum wage and implicitly tells employed workers that if they rock the boat over pay and conditions, they can be replaced by someone working for effectively nothing. Of course in capitalism the jobless ‘reserve army of labour’ has always served this purpose; workfare accentuates it.

With Tesco having been forced to backtrack, and other companies (e.g. Sainsburys, Poundland) having pulled out of the scheme due to pickets and other expressions of public opposition, and prominent workfare contractors A4e having been investigated 9 times for irregularities in the way they shaft the unemployed (we chuckle at the implicit notion here that there is a ‘respectable’ way to exploit vulnerable people) it would seem that the introduction of workfare does not have to happen as smoothly as the government might like. Those companies who are still on board with the scheme are likely to find more picket lines outside their outlets in the future.

In 2011 Just Books Collective registered as a workers co-operative and moved into new office premises in Belfast.

Just Books has a history of being an outlet for radical and revolutionary ideas that stretches back to the opening of the original shop in Winetavern Street, by the Belfast Anarchist Collective, in June 1978.

While the shop closed its doors in June 1994 the Just Books Collective continued to provide stalls at events such as grassroots gatherings and at Belfast’s annual May Day celebrations.

Just Books Collective are currently developing a labour and community education project – Just Learning. Piloting the programme with community groups in Belfast and Carrick we aim to add workplace organising, common history, labour history, anti-sectarian and race and ethnicity training to our curriculum over the next couple of months.

We have a group of experienced tutors and lecturers committed to community development, co-operative principles, and social and economic justice for all. Our focus is unashamedly on working-class and disadvantaged communities across the north.

This is part of a process that has included registering as a workers cooperative. We feel it is important to promote alternatives in these times of crisis for working class communities that are based on mutual aid, understanding, participation, self help and co-operation.

Organise! and the Just Books Collective will be hosting the 4th Belfast Anarchist Bookfair on the 28th of April at The Centre, Little Victoria Street.

Discussions will centre on responses to the current ‘crisis’ from Occupy to workplace organising and resistance. Other workshops will take place on radical social centres and cooperatives, and more have to be confirmed.

There will of course be plenty of stalls with books, publications, t-shirts, posters and the latest info on ongoing campaigns and organisations.

The evening will be rounded off with a benefit for towards the costs of the bookfair and we have some (yet to be unveiled) activity on the Sunday as well.

Primark Workers To Strike Back!

Workers in Primark are striking across the north on the 16th and 17th of March.

Following pay freezes two years in a row. Over the same two years Primark’s profits have increased to £644 million!

The workers, USDAW members, voted 87.7% in favour of industrial action against what is in reality a pay cut for the second year running. Usdaw has over 700 members employed by Primark which is just over 90% of the total workforce.

Striking workers have appealed for support on the picket lines.

Attended by friends and comrades of Sarah’s from Organise!, the Centre and the SP the topic of the lecture was ‘Socialism and Titanic Town 1911-1912’.

Delivered by Dr John Lynch the talk looked at the massive growth in Trade Unionism in the north in the early 1900s and the problems with Trades Union conservatism in the period. The development of labour politics at the time was also explored alongside the splitting of the labour movement in relation to the Unionist and Nationalist politics of the day.

John asserted that then, as now, it took courage to be a socialist staying true to the cause of labour. Then as now we need revolution not reform.

The talk is currently being developed into a pamphlet.

Organise! picketed the Belfast offices of Adecco, in Adelaide Street, at lunchtime on Monday 6th February.

Adecco are recruiting scab labour for an Asea Brown Boveri (ABB) factory in Cordoba, Spain where workers have been on indefinite strike since 28th November. The strike was called in protest at plans to make the workers redundant and replace them with non-union workers with no relevant qualifications or experience.

We were joined on the picket by members of the SP and PCS union. In a short space of time we ran out of leaflets. The manager came out at one point concerned that people may think his branch of Adecco were hiring scab labour. He was politely advised to take it up with his bosses.