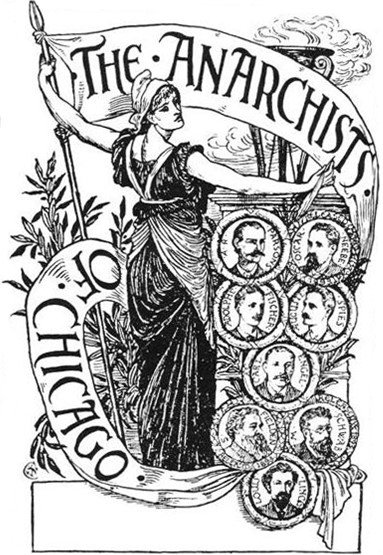 ORGANISE! A Call To Action

On May Day we celebrate the victories we have fought for and gained as working class people in over 200 years of organised struggle. The eight hour day, paid holidays, overtime rates, pensions, safer working environments, welfare provision and the weekend have all been brought to us by the struggles of organised workers, employed and unemployed.

Yet everywhere these gains are under attack as we are repeatedly told that we must all pay for the ongoing crisis that capitalism finds itself in… Pension cuts, job losses, longer hours, worse pay, more taxes, less services, more privatisation, bail outs and subsidies for the rich and increased hardship and destitution for the working class and the poor.

This is on a global scale. The debt crisis that capitalism created is being used to excuse an all out attack on those who did not create that ‘crisis’ in the first place.

Capitalism is based on robbery – it is built on profit and greed. The working class built the wealth of this society through our labour. The wealthy have siphoned off the true value of our labour to create immense wealth for themselves. This is what they call profit. They would prefer to leave us with just the bear minimum we need to survive.

This does not always work out just how they would like it to. Through organising and taking direct action against bosses and government working and unemployed people forced concessions from them. Our combined struggles won real improvements in our lives but now it seems the bosses, and their lackeys in government, are having none of that and are stripping us of the little we have fought for over the years. Lining their pockets with even more of the wealth we create!

In the face of this we need to organise. The Trades Unions are failing us. Demanding that MLAs and politicians sort things out for us will get us nowhere. Our history has shown us that direct action by workers is what forces concessions from the bosses. That history also shows us that any meaningful change demands the scrapping of capitalism and the state.

Welfare Reform will be carried out by the Stormont Executive no matter who you vote for. Poverty is on the increase while the gap between rich and poor has never been greater. The rich continue to get richer while we continue to get poorer.

The thing is this isn’t a crisis – not for capitalism. The crisis for us is that we are poorly organised and badly led. We need to begin the task of building solidarity, building confidence and building effective, revolutionary unions. We need to be better organised to begin taking back what, is after all, rightfully ours.

May Day: Origins and Legacy

On Monday 28th April people gathered at the Belfast Solidarity Federation’s second Solidarity Cafe to discuss the origins and legacy of May Day.

May Day was adopted by the international workers movement as an annual celebration of the struggle for the 8 hour day and as a commemoration of the judicial murder of 4, and the suicide of 1, anarchists involved in that struggle in Chicago in 1887.

On 1st May 1886, in Chicago alone, 400,000 workers went on strike for the 8 hour day. At McCormick Harvester Co. 200 police attacked striking workers with clubs and pistols. At least 1 striker was killed, 5-6 seriously wounded and many more injured. A rally protesting the police attacks was organised for the following day.

This rally was addressed by anarchist labour activists August Spies, Albert Parsons and Samuel Fielden. As it came to an end and most of the crowd had already drifted off due to rain 180 police arrived and ordered those who remained to disperse. At this point a bomb was thrown at police killing one officer and fatally wounding 6 more.

The police opened fire. No record of the numbers killed or wounded exists.

In the wake of the bomb throwing a reign of terror swept Chicago. Meeting Halls, Union offices, printing presses were raided, trashed and closed. Peoples homes were raided. Anarchists and socialist and many workers who were neither were rounded up. Many were tortured.

Eventually 8 men were to stand trial for murder.

All of the men were anarchists active in Chicago’s labour movement. The trial was marked by packed juries, intimidation and no evidence. What was really on trial were the men’s ideas, the aim of the trial was to crush those ideas and working class self organisation in Chicago.

August Spies, Samuel Fielden, Albert Parsons, Adolph Fischer, George Engel, Michael Schwab and Louis Lingg were eventually all sentenced to death. Oscar Neebe was sentenced to 15 years. Immediately an international campaign against the trial and its verdict began. As a result Fielden and Schwab’s sentenced were commuted to life.

Spies, Parsons, Fischer and Engel were executed while Louis Lingg cheated his executioners by committing suicide in jail.

In 1893 Neebe, Schwab and Fielden were pardoned.

The struggle for the 8 hour day went on and was one across much of the world.

Many of the gains made over the intervening years of struggle have been stripped from us in more recent times.

Zero hours contracts for some, a longer working day for others, attacks on pensions, welfare and other hard fought for rights.

The legacy of May Day is however that workers can come together and win. We have organised as workers, employed and unemployed, across barriers of sectarianism, gender, race, ethnicity and fought against governments and bosses willing to kill us. When we have done so we have won victories against seemingly overwhelming odds.

The next time you hear someone argue that there is no alternative to cuts and austerity remember our history. But don’t mourn – Organise!

The Leveller Issue 7 Coming Soon to the Archive