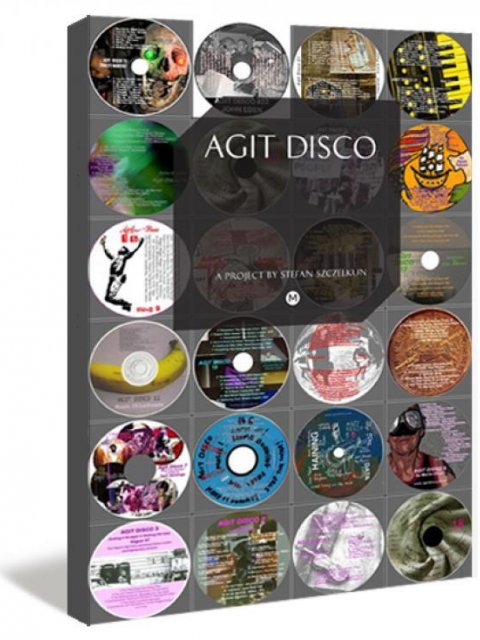 This book forms part of the wider Agit Disco project, coordinated by Stefan Szczelkun. It is a collection of music compilations by a variety of people ‘closely associated with anti-authoritarian politics and DIY culture’ (Iles, p. 6) and the book provides the explanatory annotations to those selections. The songs have been brought together as playlists on YouTube by Caroline Heron, which adds a visual dimension to the literature and the audio, in the form of images, music videos, and live footage. The book is engaging enough to stand alone for the most-part, but is more usefully (and enjoyably) taken in conjunction with the songs provided online – after all, no mere textual description of Dick Gaughan’s acerbic snarl could really do it justice.

Rather than compile a compendium of politically overt songs, Agit Disco seeks to develop a ‘dancefloor discourse’ (Szczelkun, p. 14). Classic protest songs, like those of Guthrie, Seeger et al. still make an appearance, but so too do instrumentals, pumping dance anthems, gnarly punk, cerebral hip-hop and as many other genres from the last 100 or so years as you could ask for. Unexpected tracks are littered throughout the playlists as well: Madonna’s pop-hit ‘Music’ or the traditional Orange Order marching tune ‘The Sash’, for instance. It would be difficult to describe these as politically ‘right-on’ – ‘The Sash’ is an inflammatory sectarian favourite after all – but they are political, agitational, and they have left a big enough imprint in someone’s life for them to be remembered and included here. That’s essentially what Agit Disco is all about – thinking and talking about music from our lives, reflecting on the importance of its impact, and ultimately sharing that impact with others.

Refreshingly, the book allows the twenty-three individual contributors the freedom to arrange the annotations in their own way. Some choose to provide notes for each selected track, some with a general overview of their experience of music and politics, some with photographs of their battered old LPs, others using the songs to reflect a narrative that is personal, historical, or invented. Some contributors explore the political engagement within specific genres or national cultures, others intermingle genres in demonstration of the shared themes and experiences of musicians from diverse backgrounds. This diffuse range of approaches leaves the book feeling somewhat fragmentary, but then, musical and political experience is itself fragmented. Stricter criteria for selections and formats would only have circumscribed the individual contributors’ freedom of expression, and limited the encompassing span that the project has achieved.

Agit Disco encourages an exploration of genres we might otherwise be unfamiliar with, and helps to draw out the interweaving currents of influence across politically engaged musics. If you have time to sit down with the book and listen through the compiled playlists (which is in excess of twenty-four hours of music), then you will no doubt have your musical knowledge and appreciation widened. However, if you access the streamed playlists on YouTube, you will also be relentlessly bombarded with advertisements and be refused access to a significant number of songs on the basis of copyright infringements. Marzette Watts’ ‘Backdrop for Urban Revolution’ playing backdrop to an advert for a payroll company; Crass and Chumbawamba followed by adverts for ham or Chevron; Bikini Kill accompanied by an advert for ‘Dating Chinese Lady’; Charles Penrose’s ‘The Laughing Policeman’ deleted from YouTube by another sort of money motivated pig. The instances of jarring irony are numerous and highly irritating. Too often the playlists are interrupted with ‘account associated with this video has been terminated due to … copyright infringement … Sorry about that’. At least they apologise. Of course, this is a reflection of the concerted attacks on free file sharing and freedoms on the internet more widely, but it seems odd that a project based around free access and sharing of music would let itself be compromised by a corporate entity in this way. The alternative of providing pirate CDs or hosting mp3s online and bringing down the litigious wrath of the corporate labels probably did not much appeal, understandably.

Sczcelkun sums up the Agit Disco project as:

asking how we can better use our heritage of political music. Can it be made more potent …? Perhaps a million different homemade selection albums in circulation might be the aim rather than some stone dead canonic discography. (p. 15)

Agit Disco is highly effective in sparking a reconsideration of the reader’s or listener’s experience of music and politics, and this book element of the wider project will surely encourage others to begin their own dialogues, and contribute to those million compilation CDs that Szczelkun hopes for. Perhaps, then, the most valuable contribution from Agit Disco is the urge to try it for yourself, immerse yourself in your own musical/political genealogy and share it with others – DIY!