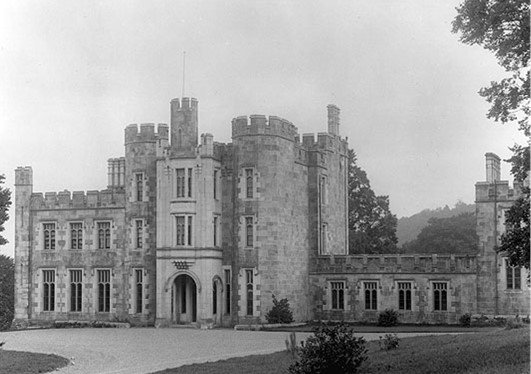 A few miles to the north of the town of Youghal, County Cork, but on the County Waterford side of the Blackwater River, stands Strancally Castle.

Traditionally a stronghold of the Fitzgerald earls of Desmond, there is a story that it was at one time in the hands of Spaniards who lured the local landowners to a banquet and them dropped them through a trap door to their deaths. This would seem to be a warning for the new owners of the castle and estate who imagine themselves as latter day aristocrats. They recently got rid of two Spanish CNT comrades who tried to challenge the conditions of servitude they were subjected to whilst working for these super-rich landlords.

Their palatial place of employment became a virtual prison during the Covid-19 lockdown, compounded by long hours of work for people who imagine themselves to be still in the nineteenth century. Like Montjuïc, the infamous fortress above Barcelona where so many anarchist activists were imprisoned, Strancally stands to write a new chapter in the oppression of workers and anarchists if we let it happen.

We extend our full support and solidarity to our sacked comrades and ask the wider anarchist movement to do the same.

Demands of the Strancally Two

The wealthy owners of Strancally Castle in are facing a long list of demands from their domestic and maintenance workers.

The demands of their struggle are as follows:

To have the actual amounts paid shown in theis payslips.

Against unlawful deduction of wages.

Against non-payment of salaries.

Non-payment in lieu of notice.

Mandatory overtime above the maximum allowed.

The workers, supported by the libertarian union of the Marina Alta region in Spain, claim that they were fired for requesting a salary increase and for raising the issue of excessive overtime on the private estate, and have announced that they will fight for reinstatement.

The anarcho-syndicalist confederation CNT-AIT and its sister organisations of the International Workers’ Association have shown their solidarity with the struggling workers, and have notified the company of the initiation of an official union dispute and the organization of a range of solidarity actions. Organise! has also shown its support for the workers’ demands.

Inspectors from the Workplace Relations Commission (WRC) have already confirmed payslip irregularities, certifying that the payment for overtime was made in breach of the Irish Payment of Wages Act.

The family company of the owners of the castle will have to facilitate the pay slips not delivered to the workers and regularize their salaries and taxes, and has begun a process of reviewing the payments to its large number of “domestic” workers.

In a further act of arrogance, the powerful owners of Strancally Castle, Gianni and Michael Alen-Buckley, have hired a lawyer who is appealing against the complaints of the workers, alleging that they are “not well founded”, so the rest of the workers’ demands are pending adjudication by the Workplace Relations Commission.

Gianni Alen-Buckley, born Giancarla Maria Gerarda Forte, and her husband Michael are facing the self-organised working class action of anarcho-syndicalists, who have dedicated more than a century of history to the fight against capitalism and for a society free of exploitation.