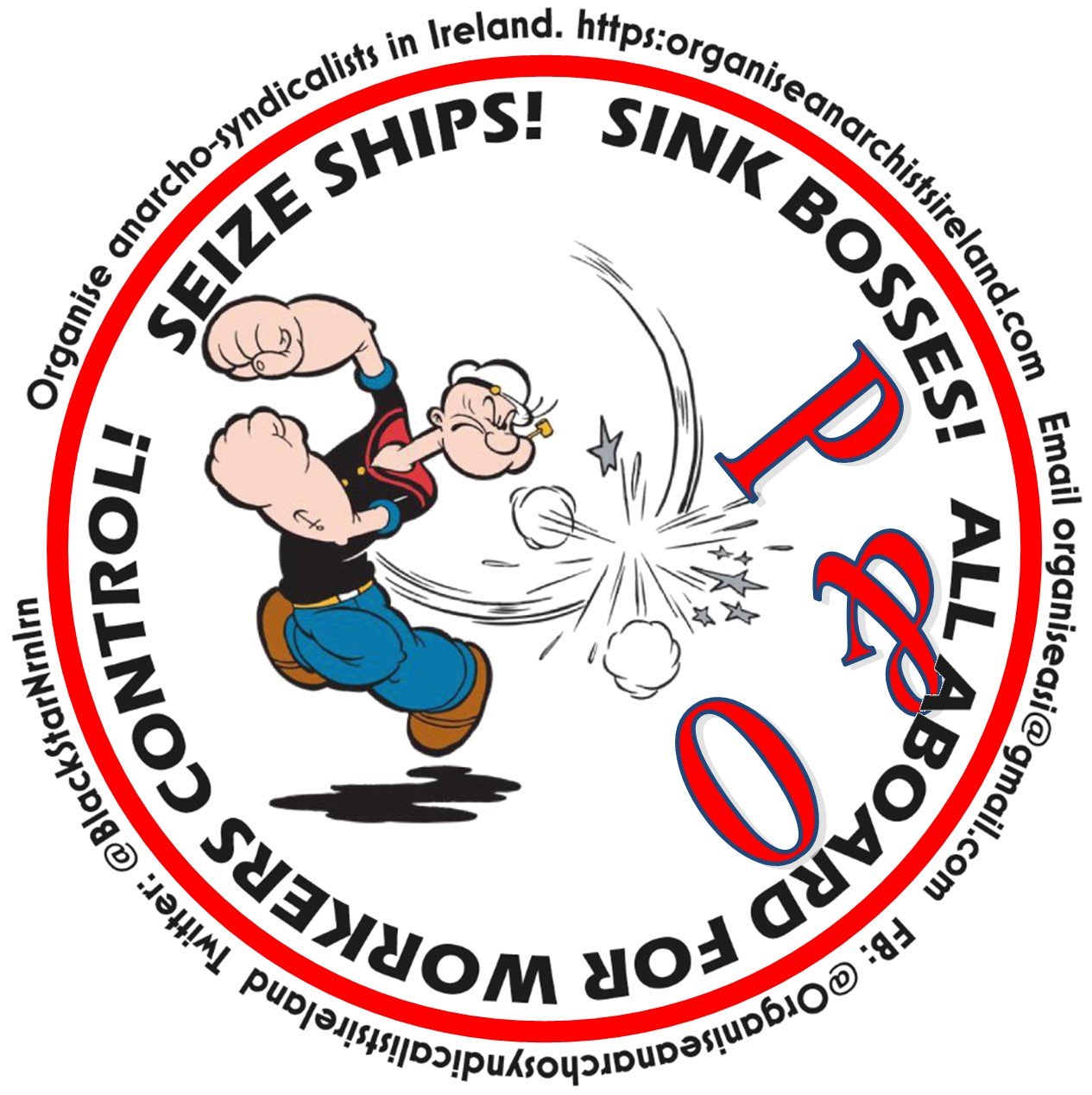 On Thursday 17th March, in what is being referred to as the Saint Patrick’s Day jobs massacre, P&O Ferries/DP World had private security staff force their workers off ferries in harbours across Britain and Northern Ireland in a move designed to prevent possible occupations of the boats by the staff they were about to make redundant. Their actions were aggressive, threatening and symptomatic of a boss class so removed from our reality that they don’t even see us as human.

We are doing what little we can to support the sacked workers by spreading the demand to boycott P&O. No matter what does or does not come of the official Trade Union campaign. We will be posting updates, info, stickers and posters here.

The second demonstration held in support of the sacked workers was held on Friday 25th March and was attended by over 80 members and officials of Trades Unions including NIPSA, UNITE, Nautilus, RMT, Prospect, SIPTU, PCS, FBU, GMB, Unison, the Belfast and District Trades Union Council, and anarcho-syndicalists from Organise! A number of those in attendance travelled from picket lines to be there with striking council workers, education workers, and UCU strikers out to give their solidarity. Of course a number of the sacked workers themselves, including their shop stewards/delegates were also in present. Had the rally been organised for a day and time when so many of our fellow wage slaves were not at work the numbers would undoubtedly have been greater.

Old comrades and new mingled outside the train station talking about old and current disputes and the disgraceful treatment of the P&O Ferry workers in Larne, Dover, Liverpool, Hull and Cairnryan before making our way across the street and gathering beside the European Causeway to listen to an array of Trade Union speakers. A short time later the European Causeway would be impounded by the Maritime and Coastguard Agency for being unfit to sail – bearing out Alex Gordon’s point that the agency workers (being used as scabs to replace those who have been locked out) are underpaid and unsafely undertrained.

There was much talk of solidarity, class unity, past struggles by Irish Ferry workers in the Republic (a struggle which was also supported by Organise!), capitalist greed and adventurism, and in the face of it a struggle against a future with no rights and on minimum wage. Anger was on display but will resolve measure up?

The main speaker on the day was the RMT president Alex Gordon who early on mentioned that the Union leadership would be meeting the local P&O bosses on the same day. If they didn’t re-employ all the workers Alex seemed to be pinning all his hopes on a campaign that aims to force the government to ‘seize the ships of oil rich oligarchs’ and to take them as an asset for this country. In the same breath that he said the Tories cannot be trusted he said demands for ‘a political solution was the only solution’, expecting the same Tories to deliver said political solution.

Not only are the Tories untrustworthy but their very name comes from an accurate Irish language description of them going back over 300 years. It was an insult derived from the an old Irish word tóraidhe, in modern Irish tórai, meaning outlaw or robber. Exactly what makes the RMT president believe that the robbing bastard Tories, crushers of the miners, the most blatant political expression of barbaric capitalism (not that Labour in power have ever been far behind them) would do anything to protect workers is beyond us. He himself claimed that the government were most likely tipped off about what was about to happen to 800 P&O workers and allowed it to go ahead.

More stark and realistically Alex talked at length about the lack of adequate training, as well as wages, the agency workers brought in as cheap replacements would receive. Turning huge dangerous pieces of machinery into death traps. He described it as a ‘gross danger to public safety’ declaring ‘these vessels are being turned into death traps’. He ended the main part of his speech with a demand that we can get behind 100%, the demand that everyone boycott P&O. This is a demand that is winnable. Without re-instatement we will sink the bastards.

Alex then handed over to the current incumbent in the post of Assistant General Secretary of The Irish Congress of Trade Unions (basically the ‘leader’ of the Northern Ireland Committee of ICTU), Owen Reidy. Reidy talked about thuggish capitalism, the terror inflicted on workers told to ‘go quietly to get a better package’. He stated that these ferries should be regarded as public transport, the ships seized and the workers reinstated. He did not believe we would get any comfort or support from Westminster but that our movement had to achieve these things. An RMT local shipping representative then spoke denouncing the user of scabs to force workers out of their jobs.

Next up was Carmel Gates, speaking as General Secretary of NIPSA expressed solidarity and anger and the belief that we were witnessing our class getting back on its feet again with education workers and council workers taking action for better terms and conditions.

Kevin Doherty spoke on behalf of the Belfast and District Trades Union Council saying that we need to stop DP World, the owners of P&O Ferries, now. This company has shown us the naked face of barbarism and in the meantime they have been given £50 million in taxpayers money to develop Free Ports here – free from regulation and workers rights.

Denise Walker from the GMB expressed outrage at the Saint Patrick’s Day job massacre, ‘we are not going to allow this to happen’, she said ‘ we will stand together’ and with the public onboard no-one will travel on these ships. Niall McNally from SIPTU in Belfast spoke of the fight back being conducted by council workers in Newry and Down and pointed out that the law will not solve this. Instead ‘the key word is solidarity’ and it is up to the Trade Union movement to put practical measures in place to defeat the P&O bosses.

Susan Fitzgerald spoke as Ireland regional organiser of UNITE about fight back and solidarity. Alex came back to us with a reminder that these workers actually lived onboard these ships for prolonged periods of time, pointing out that images of their belongings dumped out of their cabins into skips in Dover was a perfect example of the contempt P&O Ferries and DP World had for people who had been their employees. He talked of struggles passed and the need to take up ‘a fight for our class’ against the plan the capitalists have for us all. He reiterated the line that this was a political campaign pushing for government intervention on the workers behalf. Organise! have more faith in winning demands through an effective boycott that in the going cap in hand to politicians who have the same contempt for us as the bosses.

We mingled a bit with old comrades and new as the rally broke up, regrouped afterwards and agreed that the best solidarity that a small group of anarcho-syndicalists could show for this struggle would be the pushing of a boycott of P&O until the workers are reinstated or the company that ditched them is sank!

Solidarity with the Strancally Two