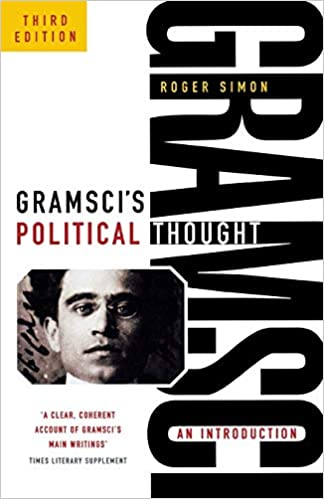 From an anarchist perspective, Gramsci is in many ways the least objectionable thinker in the Marxist canon (though, as a member of the Italian Socialist and then Communist parties, he was actually frequently outspoken in his opposition to the anarchist movement). Roger Simon’s introduction to Gramsci, first published in 1982 and twice since revised, gives an excellent overview of his key ideas, and Simon’s interspersed application of these ideas to the context of contemporary Britain helps to elucidate their significance.

Socialism in Italy was born anarchist, and it is interesting that throughout Gramsci’s thinking he rejects many of the central tenets of Marxism in favour of perspectives that compare more closely with anarchist thought. For example, Simon explains Gramsci’s concept of ‘welding the present to the future’ (p. 84), quoting from Selections from Political Writings, 1910-20 (edited by Quintin Hoare) to explain that ‘urgent necessities’ must be satisfied while ‘work[ing] effectively to create and “anticipate” the [future]’ (p. 65) – the socialist revolution ‘is a process which begins under capitalism’ (p. 84) not something which occurs only after a sudden, violent revolutionary moment. Gramsci terms this the ‘war of position’, but it clearly equates to an anarchist prefigurative approach and is exactly the sort of argument made by his contemporary, Malatesta.

In the very next section, Simon describes Gramsci’s ideas on taking control of labour, which argues for empowerment of the workers through ‘emancipating themselves’ (p. 95) – a classic tenet of anarchist direct action, and in the context of factory councils this closely echoes the strategies of anarcho-syndicalism, which was very prominent at that time (though, again, Gramsci was a critic). As Simon points out, Gramsci also borrowed several key concepts from the French syndicalist Georges Sorel, especially the idea of ‘intellectual and moral reform’ (p. 97) which emphasises the importance of subjective, personal and interpersonal revolution. Gramsci conceives power as a social relation (p. 75), an approach which has more in common with the ideas of the anarchist Gustav Landauer (1870-1919) than the crude ‘economism’ of orthodox Marxism.

This also fundamentally impacts the revolutionary strategies advocated by Gramsci – the state-seizing tactics of Lenin and the ‘mechanically determinist’ waiting tactics of his contemporary (and rival) Bordiga are eschewed in favour of building a counter-hegemonic force (especially in the realms of culture and ‘civil society’), while strictly enforced top-down party discipline is scrapped for ‘democratic centralism’, described by Gramsci as ‘a matching of thrusts from below with orders from above’ (p. 106).

But while most of Gramsci’s ideas are a clear improvement on other seminal Marxist writers, he remains vanguardist in an orthodox Marxist sense (p. 18) and happily advocates allying with nationalist movements (p. 20). As Simon points out, ideas drawn from Gramsci’s Prison Notebooks are fragmentary and woolly, since the writings were basically preliminary sketches, and terms were often thinly coded to evade Mussolini’s state censor. Simon happily concedes a certain degree of interpretation in any discussion of Gramsci, so while the perspective developed in this book marks quite a distinct break from orthodox Marxism in many respects, this could be weighed differently by other commentators.

Whatever the finer points of Gramsci’s philosophy, this slender volume serves as an excellent introduction to the key concepts, places them in their historical context, and explains how these ideas might be applied in understanding society today.

Nazima Kadir, The Autonomous Life? Paradoxes of hierarchy and authority in the squatters movement in Amsterdam