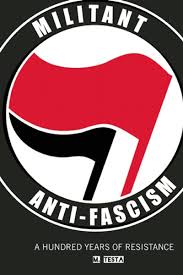 This is a popular history without many academic trappings, sprinkled the humorous reportage with which readers of M. Testa’s blog will be familiar. Some notable witticisms include: the suggestion that activists throwing eggs and flour at fascists might also have been able to turn-out a nice quiche (p192); the deadpan description of ‘the 1980s [as] one of the most violent decades since the 1970s’ (p206); and euphemisms for fighting as a ‘vigorous encounter’ (p271) or a ‘short but frank and to the point discussion’ (p245).

There is also the serious task of demonstrating a continuous thread of militant anti-fascism in Europe, from the turn of the twentieth century until today – necessitated by a fascist threat which ‘fade[s] but never really disappears[s]’ (p318).

The first half of the book rattles through a breakneck history of pre-World War Two anti-fascism covering Italy, France, Austria, Germany, Spain, Hungary, Romania, Poland, Ireland, Scotland and England (under which Wales is subsumed). Some of these histories are very short – France covers only a handful of pages, Hungary and Romania even fewer, and Poland only twenty lines. Even where the country-by-country overviews are longer, they rely on a very small number of secondary texts with no primary sources at all, in what is effectively a series of disjointed and limited literature reviews. For example, the chapter covering pre-war anti-fascism in Scotland references just four sources, one of which, by the Vice journalist Liam Turbett, is incorrectly identified as a Master’s thesis, indicative of a lack of rigour in the referencing generally. It is also frustrating that the book lacks endnotes or a bibliography, obliging readers to trawl back through the footnotes to properly identify sources.

The second half of the book focuses on Britain and Ireland post-World War Two, and benefits from the inclusion of archive material and new interviews with anti-fascist activists. These useful contributions, from around ten anonymous interviewees, help to illuminate the experience of, and justifications for, militant anti-fascism from an on-the-ground perspective. The testimony is largely concerned with ‘war stories’ of brawling with boneheads – but unapologetically so. The book readily embraces the violence inherent in militant anti-fascism.

Criticisms of militant anti-fascism as ‘male, macho and overly violent’ (p276) are acknowledged, but not meaningfully tackled, and a sense of machismo lingers around the book. M. Testa criticises the heterosexism of fascist groups, but (hypocritically) ridicules individual fascists for being gay. Discussing Mosley’s repudiation of ‘homosexualists’ in the 1930s, M. Testa slings the term ‘deviants’ at the fascists, clumsily miring himself in the fascists’ own conflation of ‘homos’ with ‘impotents’ and ‘pederasts’ (p126). Accusations of sexism within anti-fascism are dismissed offhandedly, by pointing-out that ‘two women’ were involved in physically opposing fascists in the East Midlands, in addition to women’s special ability to gather intelligence ‘by wandering into pubs, dressed up for a night out’ (p276). A sexist attitude is also evident when the abhorrence of a fascist assault is apparently magnified by describing the victim as a ‘female journalist’ (p178). None of M. Testa’s interviewees are identified as women, and other than references to ex-football hooligan Caroline Gall, this perspective is notably absent.

The core narrative is that militant anti-fascist violence is effective, as demonstrated by the numerous examples of anti-fascists beating fascists off the streets across Europe over the last century, as well as more recent successes in Britain and Ireland. However, M. Testa’s approach is entirely descriptive, with very little in the way of critical analysis. For example, militant anti-fascism is described as incorporating a class analysis, as opposed to liberal anti-fascisms, but this is never adequately explained. There are repeated calls for ‘non-partisan’ anti-fascist coalitions across the left, but without addressing the inherent tensions between anarchist and authoritarian-Marxist forms of organisation. The cultural emphases of anti-fascism can be inferred from accounts of gigs, festivals, and mentions of numerous punk activists, but the role of culture is not examined in any explicit detail. It is suggested that ‘use of physical activity’ is ideally combined with ‘organisation within the workplace, local communities, and links with other working-class organisations’ (p5), but issues around a diversity of tactics are left unexplored.

The book’s best contribution is certainly in the more recent material, and its use of archive and interview sources. The historical overviews are quite weak by comparison, and might have been better condensed into a single introductory chapter. While lacking in critical analysis, M. Testa undoubtedly succeeds in tying contemporary anti-fascist struggles with those celebrated struggles of the twentieth century. As such, Militant Anti-Fascism might be of particular interest and value to today’s anti-fascist activists, placing their struggle within a historical context of smashing fascism wherever it raises its ugly head. ¡No Pasaran!