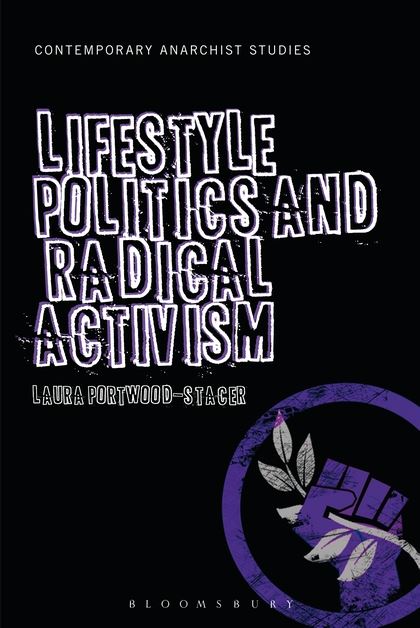 Bookchin’s best-known polemic may be nineteen years old, but ‘lifestylist’ endures as a slur in many anarchist circles. Laura Portwood-Stacer’s Lifestyle Politics and Radical Activism takes the concept to task, and through theoretical consideration, interview material, and participant observation describes lifestyle’s role in current US anarchist movements, unpicking various tensions along the way. Portwood-Stacer’s postmodernist/feminist/queer perspective sets her at a remove from the debate, and allows her to critically analyse contemporary anarchist practices as an outsider. Despite an exclusive focus on the US, this book will speak to the experiences of anarchists across the world.

Portwood-Stacer’s analysis relies on the concept of ‘lifestyle activism.’ This conflation of ‘lifestyle’ and ‘activism’ is problematic – even among Portwood-Stacer’s interviewees ‘almost none of them would refer to themselves as lifestylists or appreciate being perceived as such’ (p. 134). Expected ‘lifestylist’ themes such as subcultural affinity and consumption choices are included under this ‘activist’ rubric, but so too are the more classically anarchist themes of prefiguration, propaganda by the deed, and direct action. Direct action isn’t commonly reconciled with ‘lifestylism,’ but Portwood-Stacer asserts that ‘[l]ifestyle practices can be understood
as direct action because they attempt to materially change one’s everyday experience without appealing to a central entity’ (p. 20). Material considerations such as this help to challenge the dichotomy between ‘lifestylism’ and ‘workerism,’ and an attempt to balance mutual criticisms is a central thread. On one hand those who cursorily dismiss lifestyle politics are admonished for failing to have ‘[a]n understanding that practices may fulfil different goals to different degrees’ (p. 49), but there is also a warning against the temptation to ‘fetishise anti-consumption as a tactic, [and] not to conflate its satisfaction of personal fulfilment with its fulfilment of the promise of social change’ (p. 50).

As might be expected from a postmodern/feminist/queer perspective, identity receives a lot of attention. Discussing the ‘ethically correct’ behaviours of those ‘performing an anarchist identity,’ Portwood-Stacer lists ‘having a vegan diet, getting around by bicycle, resisting mainstream norms of hygiene and self presentation, and being sexually non-monogamous’ (p. 87). (There is a curious fixation on hygiene throughout the book.) The attempt to balance positive and negative critiques is again evident when Portwood-Stacer notes that identity often substitutes for meaningful political engagement, but that there is also potential in anarchism as ‘a constructed identity [which] could be a point of possibility for activist communities … since what anarchism is can grow and change with the conditions and problems at hand’ (p. 93). This point resonates with cultural considerations, and Portwood-Stacer’s attention to culture elsewhere is useful, for example when she argues that ‘culture and collective identification are, in fact, the primary basis upon which an anarchist “movement” coheres at all’ (p. 16), and that ‘[t]he “chasm” only exists in the minds of those who have not come to terms with the reality that social movements are always cultural formations as well’ (p. 151).

The opening five chapters are generally overly sympathetic towards ‘lifestyle activism,’ but this is remedied in the sixth chapter, which casts a more critical eye over the issues raised in previous chapters, expounding some interesting contradictions, and adding useful complications. Complication is this book’s best contribution. The central argument throughout Lifestyle Politics and Radical Activism is that ‘there is no clear-cut line to be drawn that would separate “real” anarchists from lifestyle anarchists’ (p. 133), and that more effort towards thoughtful and nuanced criticism of the supposed lifestylist/workerist chasm can only be of benefit to the anarchist movement as a whole.