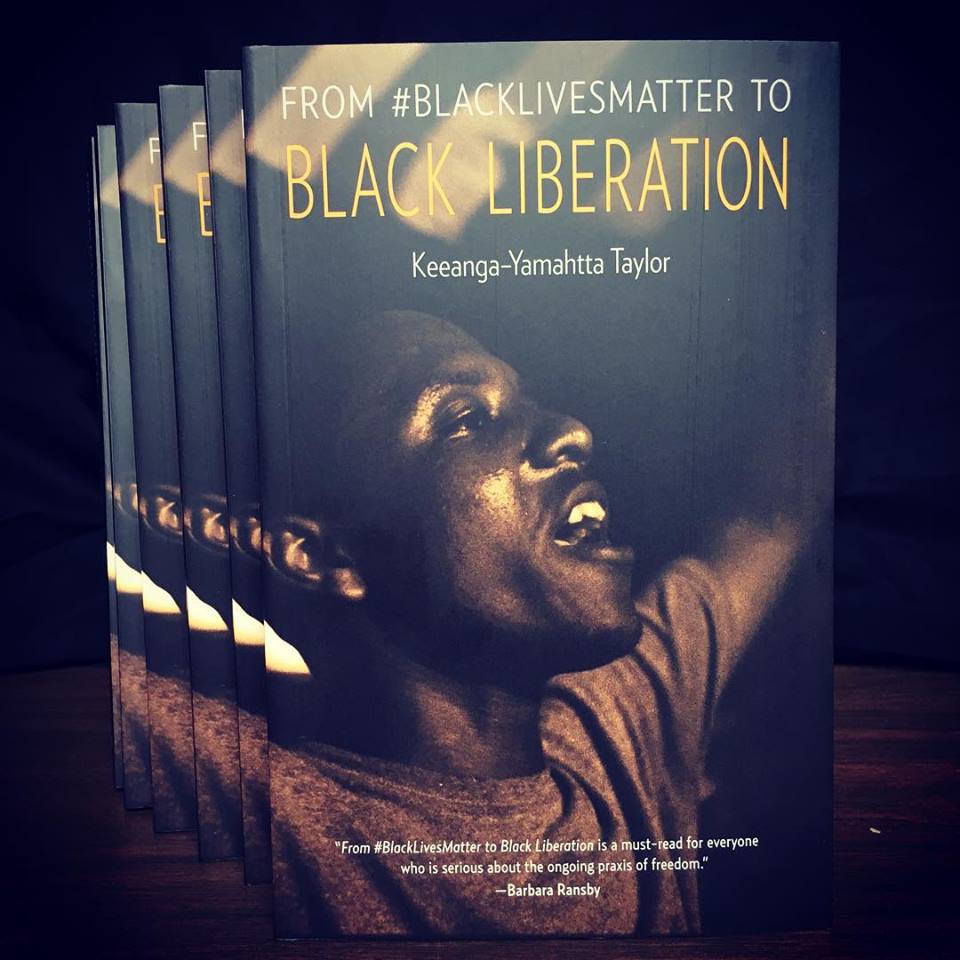 ‘… quite stunningly ignorant; and since they know that they are hated they are always afraid. One cannot possibly arrive at a more surefire formula for cruelty’
James Baldwin, 1966

Little seems to have changed about the police in the USA since Baldwin’s writing in 1966. One of the many disturbing aspects of Keeanga-Yamahtta Taylor’s contemporary work is that the statistics on the numbers of black Americans who have died as a result of police contact are likely already in need of rewriting.

Deaths in Ferguson, New York, San Diego, Charlotte (and many others), where police have killed with seeming impunity, have led to the eruptions of mass protests on the streets, often under the banner of Black Lives Matter, and would seem to dispel illusions (if any existed) that, in the age of the first black president, the USA is a ‘postracial’ or ‘colourblind’ society.
Of course, this situation has not been arrived at ahistorically, and Taylor begins by looking back, arguing that ‘race and racism … have been the glue that holds the United States together’ (p. 29), from slavery through Jim Crow to post World War Two, when the discrediting of racism and eugenics and the need for the USA to portray itself internationally as a ‘democracy’ in contrast to Soviet ‘tyranny’ changed the dynamic of ‘race relations’. However, McCarthyite anti-communism of the 1950s simultaneously purged radicals from organised labour, reducing its focus on anti-racism. Taylor investigates how the black liberation movements of the 1960s linked racial with economic injustice and how enactment of Civil Rights legislation led to a turn to ‘colourblind’ politics. This in turn ‘allowed portions of the political establishment to separate Black hardship from the material conditions that activists had worked so hard to expose’ (p. 53). In the new context of supposed political equality, black poverty could be blamed on ‘black culture’ or matters of individual moral shortcomings rather than structural factors, what Daniel Patrick Moynihan had described as a ‘tangle of pathology’.

One consequence of the Civil Rights era is what Taylor describes (in the title of Chapter 3) as ‘Black Faces In High Places’ – and indeed, at the time of writing, in the highest place of all. However the reality is illustrated by the response of the black political establishment to protests in Baltimore over the death of Freddie Gray: ‘When a Black mayor, governing a largely Black city, aids in the mobilization of a military unit led by a Black woman to suppress a Black rebellion, we are in a new period of the Black freedom struggle’ (p. 80). Indeed the growth of a black middle class, black political elite, and development of black capitalism (as fomented by Nixon) have led, not to liberation, but to ‘a stultifying “pragmatism” and “realism” in place of aspirations to change the world’ (p. 88) and they ‘often do more harm than good while escaping the label “racist”’(p. 79).

Turning then to the specific phenomenon that has sparked a wave of street protests, Taylor examines how black communities are policed in ‘The Double Standard Of Justice’. She writes that ‘[w]hen the police enforce the law inconsistently and become agents of lawlessness and disorder, it serves as a tangible reminder of the incompleteness of formal equality’ (p. 108).
She identifies three distinct iterations of post-Civil Rights policing: Reagan’s War On Drugs; Clinton’s crime regime; and the current War On Terror (all preceded by Nixon’s turn to ‘Law & Order’ in the 1960s which, in tandem with ‘colourblind’ policies, purportedly removed ‘race’ from the equation but left structural inequalities untouched).

It is well known today that the USA accounts for 5% of the overall world population and 25% of the world prison population. Taylor also examines the racist use of Stop-And-Search as a cash cow for cash-strapped municipalities, writing that ‘police are increasingly responsible for municipal revenues’ (p. 126-127). In the conclusion to this chapter, Taylor arrives at a cogent point, and one crucial to the theme of the book:
The police function primarily as agents of social control in a society that is fundamentally unequal, which means that they operate largely in poor and working-class communities. Because African Americans have historically been overrepresented in these neighborhoods, they are often the targets of policing. (p. 133) Police have also murdered thousands of poor latinos and white people, which ‘establishes an objective basis upon which a multiracial movement against police terrorism can be organized’ (p. 131).

The reign of the first black President Of The United States Of America is dealt with in Taylor’s chapter titled: ‘The End Of An illusion’. Much of Obama’s rhetoric has in fact pandered to black stereotypes and replicated the discourse of individual moral failing. And more damningly, ‘the Black political establishment, led by President Barack Obama, had shown over and over again that it was not capable of the most basic task; keeping Black children alive. The young people would have to do it themselves’ (p. 152). Taylor depicts Obama’s terms of office as a signal that ‘Black inclusion in the political establishment has already come and failed’ (p. 219).

Taylor goes on to examine the need for people to ‘do it themselves’, looking at the movements that have arisen from street protests, such as BYP 100, Hands Up United and, of course, #BlackLivesMatter. These have often involved what Taylor calls a ‘changing of the guard’ to a new generation of activists, citing as an example the negative role and rhetoric of Al Sharpton in Ferguson, who, in the wake of street protests over the death of Mike Brown, ‘condemned the young people of Ferguson [and] used stereotypes to do so’ (p. 160). Another aspect of the new wave of protests has been the visibility of women at the forefront; this is a direct consequence of the disproportionate incarceration and killing of black males: ‘women have stepped into leadership roles because of the absolutely devastating impact of policing and police violence in Black people’s lives in general’ (p. 166). Black queer and trans people have also been visible in the protest movements.

For all their positives, Taylor offers some critiques: ‘this particular method of organization can be difficult to penetrate. In some ways this decentralized organizing can actually narrow opportunities for the democratic involvement of many in favor of the tightly knit workings of those already in the know’ (p. 176). She is also critical of the acceptance of philanthropic or state funding, as organisations can ‘face problems if their funders develop political critiques of their work’ (p. 178). It is worth noting other critiques of #BLM that have emerged, such as from Elaine Brown.
Moving forward, Taylor examines how these movements might link up with broader struggles and the key importance of solidarity, for example with low-wage workers’ movements, especially given the overrepresentation of African Americans in the low-waged working class. Taylor unpacks the importance of class, asserting that ‘under capitalism, wage slavery is the pivot around which all other inequalities and oppressions turn’ (p. 206), and argues that this is not class reductionism, but rather ‘locating the dynamic relation between class exploitation and racial oppression in the functioning of American capitalism’ (p. 207). Returning to the theme of solidarity, Taylor is critical of the ‘blind spot’ of class among many activists as it leaves them unable to grasp ‘the material foundation for solidarity and unity within the working class’ (p. 215), preferring instead the concept of ‘allyship’, which Taylor believes ‘doesn’t quite capture the degree to which Black and white workers are inextricably linked. It’s not as if white workers can simply choose not to “ally” with Black workers to no peril of their own’ (p. 215). Related to this is a critique of the usefulness of the concept of ‘whiteness’. Taylor believes it ‘collapses important distinctions between whites into a common white experience that simply does not exist’ (p. 211) and also obfuscates the actions of elite black political actors such as Obama or Clarence Thomas who can be ‘accused of performing whiteness instead of exercising their class power … as if [they] are acting in ways they do not wholly intend’ (p. 210).

In conclusion, Taylor’s book is a recommended read. Not only an analysis of contemporary protest, but an illuminating history of institutional and structural racism in the USA, an incisive critique of ‘Black Faces In High Places’ and a valuable insight on how struggles against police racism, brutality and murder might be, must be, broadened and linked to others: ‘Black life cannot be transformed while the rest of the country burns … Black liberation is bound up with the project of human liberation and social transformation’ (p. 194).