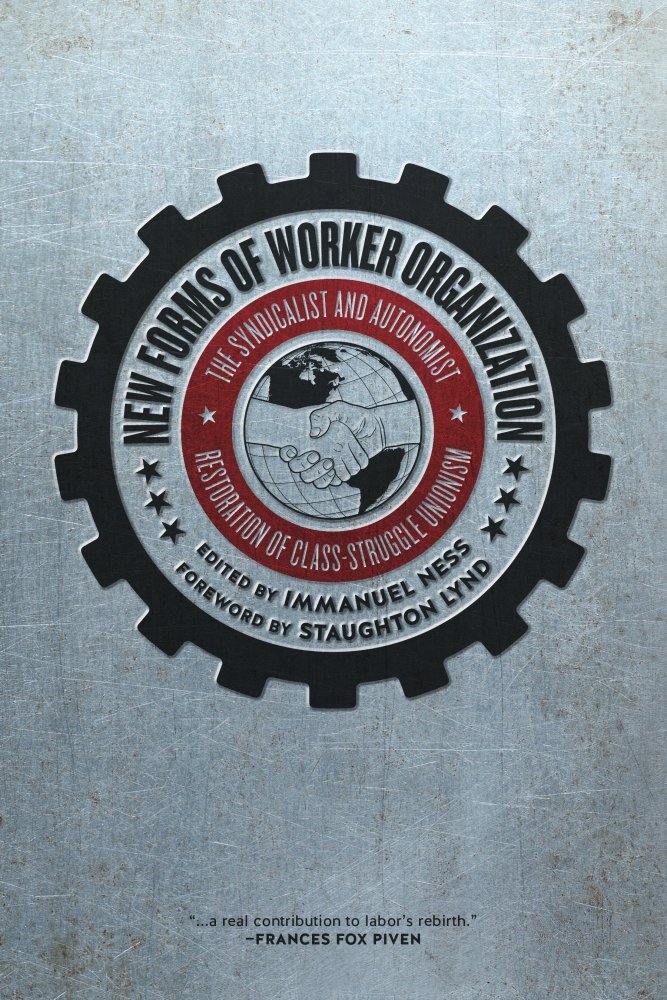 Bureaucratic, class-compromise unions have had their day – they are ineffective at best, totally treacherous at worst, they are no longer trusted to represent the interests of workers, and their memberships are at an all-time low. In their stead alternative unions and workers’ assemblies based on democracy, direct action, and prefigurative revolution are popping-up across the globe, informed by anarchist, syndicalist, autonomist, and council-communist traditions. This is the argument that weaves its way through the collected contributions that make-up New Forms of Worker Organization.

There are thirteen case studies here, with a broad range of contexts, styles and approaches. They include historical pieces such as Steven Manicastri’s brief history of Operaismo in 1970s Italy, Gabriel Kuhn’s overview of the centenarian SAC in Sweden, Burgmann, Jureidini, and Burgmann’s case studies of workers’ control experiments in 1970s Australia, and Genese Marie Sodikoff’s ethnographic work from 1990s Madagascar. Throughout the chapters, comparisons are also frequently made with the early twentieth century, both in terms of socio-economic circumstances and the syndicalist and worker-run unions which emerged at that time. However, one of the key assertions of this volume is that the qualitative step-change from traditional to alternative union organising is eminently current, and as such most of the chapters take a contemporary focus. Editor Ness writes in his introduction that this focus sets the volume apart, as he argues that ‘[l]iterature on anarchism and syndicalism is almost entirely historical, drawn from the late nineteenth to early twentieth centuries’ (p 6). I’m not sure that this assertion is entirely accurate, especially considering the body of literature on contemporary activism that has been produced in recent years, but the up-to-date focus is very welcome all the same. In addition to the historical perspectives on Italy, Sweden, Australia, and Madagascar there are contemporary case studies from across the global north and global south, with chapters on Russia, China, India, South Africa, Colombia, Argentina, the UK, and the US.

The diversity of case study contexts is reflected in the mixed-bag of approaches and analyses. The most engaging chapters are those which make use of interview material and correspondence with struggling workers, or those written by participants in struggles themselves. Aviva Chomsky’s chapter on miners’ solidarity with indigenous communities in Colombia, Darío Bursztyn’s chapter on underground train drivers in Buenos Aires, and Jack Kirkpatrick’s account of IWW cleaners in London all benefit from first-hand testimony. Erik Forman’s chapter on IWW organising in the Jimmy John sandwich chain in Minnesota is worthy of special mention, making use of a highly engaging narrative style to recount the details of the struggle from a participant’s perspective, as well as incorporating a good deal of insightful analysis. Other chapters are somewhat dry and overly descriptive. Bizyukov and Olimpieva’s chapter on Russia suffers from this especially with a death-by-data of graphs and tables. While a distaste for this approach is likely to be highly subjective, their data set only extends from 2008 to 2011, and the analysis of a shift in labour relations is quite limited as a result.

Anarcho-syndicalist, autonomist-Marxist, and council-communist analyses all rub-along together in this volume but are united in a shared disdain for ‘traditional’ unions, and an enthusiasm for the democratic, self-directed, and revolutionary forms of worker organisation that they describe – and as Ness stresses in the introduction, there is no ‘ideal type’ being proffered here (p 2). It is notable, however, that Shawn Hattingh’s is the only chapter to suggest taking over the mainstream unions as a worthwhile aim (p 112), with all the other authors placing their optimism firmly in organically formed workers’ assemblies and councils, and in the (re)emerging ‘scrappy little DIY unions’ (as Kirkpatrick describes the IWW, p 246).

This volume will certainly be of interest to those researching labour struggles in diverse global contexts, but the overarching argument of the book should appeal to workplace activists and a wider audience as well. Against the backdrop of rapacious neo-liberalism, the spread of precarious employment, and a nadir for class-consciousness, the new forms of worker organisation described here really do give hope for a democratic and militant reinvigoration of struggle which extends out from the workplace and into society as a whole.