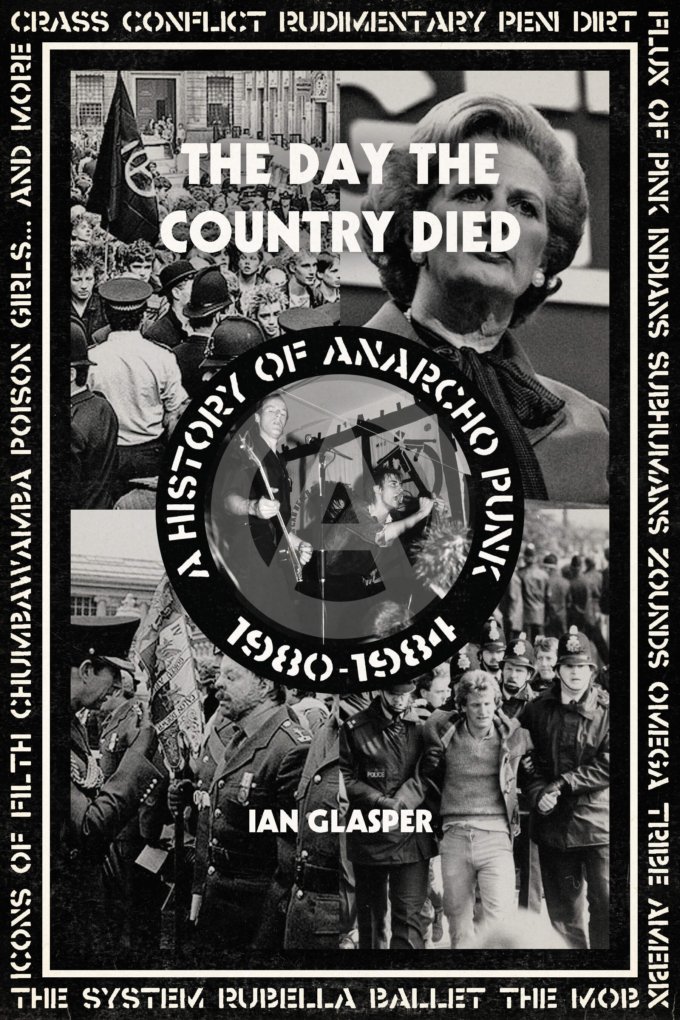 The Day the Country Died is the second in a series of four books by Ian Glasper documenting the DIY hardcore/punk scene in the UK through the 1980s and 1990s. This collection of interviews tackles the anarcho-punk subgenre, with a focus on the 1980s (the 1980-1984 subtitle is misleading, since a large portion of the content extends well beyond that Orwellian endpoint). Glasper also points out, quite rightly, that the ‘anarcho-punk’ moniker is a problematic one, since using the label ‘leech[es] away much of its power, by stuffing it into a neat pigeonhole, where, once classified, it can more easily be controlled’ (p 6), which seems to leave the entire subtitle a bit redundant. This was originally published by Cherry Red books in 2006, but the 2014 PM Press re-issue will expose the book to a wider readership, and benefits from much improved cover artwork (John Yates aping the Crass Records aesthetic very effectively).

Another addition to the PM edition is a collection of mug shots of craggily aged ‘Punk Survivors’ by John Bolloten. It’s not clear what the value of this appendix is. Glasper already includes some excellent images in the main body of the text, but it is revealing that Bolloten’s sombre portraits replicate Glasper’s exclusive focus on bands. A far more representative, and interesting, approach could have included those other voices that contributed so much to the scene without any adulation from the ‘fans’: zine writers, van drivers, gig organisers, record distributors, social centre volunteers, screen printers and, indeed, the ‘fans’ themselves. This criticism aside, Glasper provides an oral history of anarchist-inspired 1980s punk which is very valuable against the deluge of ‘punk history’ record collector guides published to adorn the coffee tables of ‘ex-punks.’ Glasper fills in the nitty-gritty detail while letting the interview respondents give their own analysis, in their own terms, exposing all the expected tensions and contradictions that make punk such a vital culture.

(Almost) all of the expected luminaries are given plenty of space here, with some interesting interview material from the likes of Crass, Flux of Pink Indians, Conflict, Subhumans, Chumbawamba, Oi Polloi etc., but consideration is also given to many of the lesser known, more ephemeral bands from the period (even Hit Parade!). The most glaring omission is Poison Girls, whose name appears on the front cover, but are only mentioned in passing by other interviewees. In his ‘disclaimer’ introduction Glasper assures that ‘[t]his is still the closest you’re likely to get to a definitive overview in your lifetime anyway!’ (p 6). The disclaimer also includes the curious line: ‘let me state once and for all: I am not an anarchist’. This is because, he says, ‘I have a wife, two kids, a regular job and, it pains me to say, a hefty mortgage’ (p 6). This bizarre statement perhaps reveals some of the ghettoising short-comings of anarcho-punk’s reductive interpretation of anarchist politics – but contrary to this many of the interviewees display a subtle and nuanced understanding of, and a lifelong commitment to, anarchism.

The Day the Country Died is a worthwhile read even for those with little or no interest in punk. It explores the ways in which anarchist politics can be successfully implemented both culturally as a ‘scene’ and materially through DIY production politics. Punk is often written off in ‘serious’ anarchist circles, but it has been and continues to be the most invigorating force for the anarchist movement of the last 50 years. Anarcho-punk, as the most rhetorically specific expression of anarchist politics in punk deserves to be taken seriously, and Glasper’s book provides a sound introduction.

Tags: Anarcho-punk, Ian Glasper, The Day the Country Died: A History of anarcho-Punk 1980-1984

Ece Temelkuran, Turkey: The Insane and the Melancholy