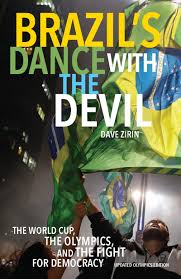 David Zirin is a sports journalist specialising in critical coverage of the World Cup and the Olympics, and both events being held in Brazil within a two year period makes a compelling (and appalling) case study of how these mega-events are used as ‘incredibly effective tools for reorganizing an economy on neoliberal grounds’ (p. 150).

This is a second edition, revised to include information on the 2014 World Cup, but despite being billed as an ‘updated Olympics edition,’ the additions in this regard are quite limited – the focus is very much on the World Cup.

Zirin argues that ‘both of these tournaments have started to seem like conjoined twins’ (p. 150), but the primary focus on futebol actually makes sense in Brazil. As Zirin writes: ‘Soccer … is inextricable from the country’s political, economic, and cultural history’ (p. 108), and illustratively, the World Cup’s ‘new soccer stadiums, some already abandoned, have become symbols of corruption, waste, and stagnation’ (p. 108). Discussion of the Olympics feels a bit tacked on, and the publication in advance of the 2016 Olympics leaves a lot of issues unanswered. While the timing makes sense in terms of impact, a post-Olympics edition would be better positioned to tie together loose ends.

Zirin attempts to provide some historical detail in Chapters 2 and 3, ‘to help those outside Brazil understand why the spending, security practices, and evictions … provoke such a strong reaction’ (p. 56). He admits that is impossible to ‘fully explain every nuance of this country’ (p. 17) but nevertheless attempts ‘a highly selective tour through [Brazil’s] past’ (p. 56). These background chapters are informative, but somewhat tangential, and the book only really hits its stride in Chapter 4, with a return of focus to the World Cup. Zirin draws numerous comparisons between the histories of Brazil and the United States, indicative of the book’s intended US audience – as is the (slightly grating) use of the term ‘soccer.’

The central argument is that the World Cup and Olympics are a form of neo-liberal ‘sporting shock doctrine’ (p. 152), used to ‘shape the economic, political, and personal destinies of masses of people, with zero accountability for the trail of displacement, disruption, and destruction they leave behind’ (p. 183). This is recognised by the people of Rio, as Zirin writes: ‘The mass actions of the summer of 2013 exposed the neoliberal theft rooted in the planning and execution of the World Cup’ (p. 232). One of the interviewees asks Zirin to ‘let people know that we’re here … and we don’t want to leave’ (p. 210), and this is the point of the book: ‘it is critical that those of us who watch the Olympics be conscious of the social cost; conscious that the Olympics in Rio are being staged on people’s backs’ (p. 8), and further, that ‘our collective destiny is tied up with every eviction, every surveillance camera, and every cracked skull on the road to the World cup and Olympics’ (p. 235). This also explains the publication of a second edition prior to the Olympics; the content may be less complete as a result, but the exposé is made more effective in its provision of a platform for resistance campaigns.

This is an entertaining and informative read, and while the rapacious neo-liberalism behind the World Cup is horrifying, the resistance, and the individuals Zirin meets, are inspiring.