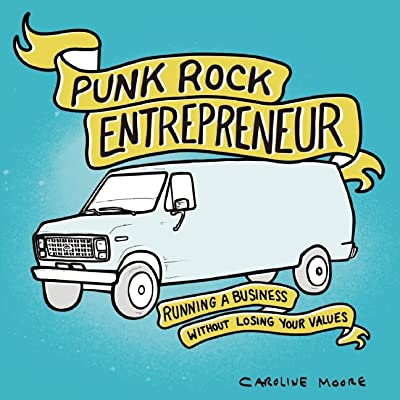 A long-time anarchist book and record publisher once derisively commented: ‘There’s DIY … and then there’s American DIY’, and (with sincere apologies to the numerous right-on Americans out there) this book is a painful example of that warped ‘American DIY’ ethos. The whole mindset behind the book is jarring, starting from the title’s use of the phrase ‘Punk Rock Entrepreneur’ and continuing unabated throughout.

Moore’s basic argument is that the DIY principles and get-up-and-go attitude of punk production are a solid foundation for running a successful business – in Moore’s case as a wedding/gig photographer. The title suggests some ethical grounding, but there is no real critique of business practices here; no suggestion of establishing workers’ co-operatives, collectives, or non-profit organisations, just a good old ‘pull yourself up by the bootstraps’ how-to guide (complete with flow charts and motivational doodles).

The chapters on networking reveal an underlying conceitedness, and this conceit is at the core of all trendy/cool/hipster businesses. Moore asserts that ‘You have a responsibility to your community to consider the impact that employees, your projects, your client choices have. Stand for something’ (p. 32), but the main entrepreneurial justification for this is that a ‘rising tide lifts all ships’ (p. 24) and, at the end of the day, being nice to people will pay dividends and give your business a super-cool reputation (but not if you were conscious of those businessy benefits when you were being nice in the first place, because ‘authenticity matters’ (p. 84)).

Entrepreneurial hipster double-think at its best!

Moore has no qualms with profiting from the exploited labour of employees or with precarious working conditions – the key, we’re told, is to ‘use your whole ass’ (p. 96) to rise above the competition. Moore does recognise that her screed is objectionable to most people involved in punk, admitting that ‘Money is kind of a taboo subject’ (p. 85), but simply writes off the predicted backlash from the ‘punk police’ as ‘boring’ (p. 91). Moore quotes someone called Jeff Finley to argue that anyone who fails to grasp this profit-oriented version of DIY has ‘a skewed perception on money from listening to too many anarcho, anti-capitalist, hippie punk bands’ (p. 94). Well, at least that explains why I found this book so irritating.

Speaking of anarchists and anti-capitalists, Moore has the brass neck to use groups such as the Carbon Defense League (p. 44) and ABC No Rio (p. 72) as examples of DIY punk entrepreneurialism in action. Punk attitudes certainly inform the activism of these groups, but they put their efforts into opposing exploitation and profiteering, which is entirely at odds with the twisted vision of DIY that Moore presents here. Moore wants us to think that this woolly ‘considerate capitalism’ is something radical; that couldn’t be further from the truth. ‘We live our lives another way’ she tells us (p. 105) – no you don’t. The individualist, entrepreneurial, competitive ethos that Moore describes is exactly the ideology that contemporary neo-liberal capitalism wants us to swallow.

As a final insult, Moore quotes someone called Reggie Little from a band called August Ruins describing a benefit gig for a ‘fallen officer’ (by which I think they mean dead cop) as ‘a good cause’ (p. 118). In the current political climate in the US, with the continuing litany of high-profile police brutality, this stands out as a particularly out of touch comment – and seems totally ignorant of punk’s deeply ingrained opposition to the police (ACAB!).

We all have to make day-to-day compromises with our current capitalist reality, but this whole-hearted embrace of neo-liberal subjectivity is appalling – Moore has gouged the radical heart out of punk and DIY, and no amount of cutesy doodles will make up for that.